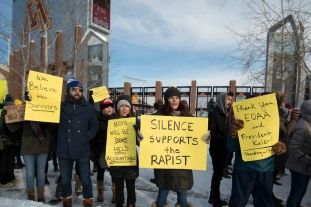 American actress Amber Tamblyn wrote an Op-Ed in the New York Times titled I’m Done With Not Being Believed about a month ago.

The gist of it is this: Tamblyn mentioned on Twitter that when she was 16, actor James Woods (who is 36 years her senior) tried to take Tamblyn and a friend to Las Vegas with him. She and her friend did not go and were safe, but that memory still existed.

She brought it up 20 years later and Woods called her a liar.

High-ranking men in Hollywood are constantly outed as abusers, pedophiles, and rapists. Despite these allegations, they still have hordes of people supporting them (either through social media or financially by hiring them and paying to see their projects).

This is not new by any means; it’s almost to the point that people are no longer shocked when yet another high-profile man is outed as a harasser. Women are still called liars, attention-seekers, or are simply ignored. These responses discourage women from reporting rape and harassment, especially when the perpetrator is a public figure, and ultimately allow these men to continue hurting women.

Oftentimes, a flood of other victims share their stories after one woman gathers enough courage to come out with her experiences publicly. They’re encouraged by one woman’s success and feel safe enough to share their own experiences. It’s usually difficult to report sexual harassment and abuse under any circumstance. It’s even harder when other women have their trauma invalidated in public.

The WomanStats database for the LRW-PRACTICE-2 variable – which covers taboos about reporting rape – reveals even more reasons why women struggle to report rape. This chart shows common fears and perceptions that keep women from reporting across North America:

Police departments and NGOs are increasing efforts across these countries to alleviate the pressures of reporting by offering sensitivity training to officers and counseling to victims, and shelters that can provide safe places for the survivors. While these efforts are necessary and appreciated, more needs to be done to address the social stigmas that women – particularly rape survivors – face when they seek justice.

*The purpose of this exercise is to highlight the fears that all women face, not to find unique reasons in various countries. All the data is from the WomanStats database from the years 2010-now, and therefore is not a definitive reflection of all the reasons women do not report. Data for Antigua & Barbuda, Bahamas, Cuba, Dominica, Grenada, Saint Kitts and Nevis, Saint Lucia, and Saint Vincent and the Grenadines was not available. Datasets like those shown above can be found for free at WomanStats.org.

One thought on “Why Don’t Women Report?”