Several months ago, I was asked to update the WomanStats scale that compares reported rapes in countries across the globe (LRW-SCALE-4).

Understanding that rapes are vastly underreported everywhere, I knew to take the numbers with a grain of salt. However, I realized that I had no idea of just how problematic the data on rape are until I delved into the project more fully.

Before I detail my experience working on this scale, it is important to first explain what data were used and how scores were calculated for each country. The generally accepted metric for expressing rape rates, as reported by the United Nations Office on Drugs and Crime (UNODC), is the number of rapes reported per 100,000 people in the population in a particular year. For example, the rape rate for Botswana in 2014 was 91.62 per 100,000.[1]

At first glance, this rate actually seems pretty good. After all, it means that less than one-tenth of a percent of the population experienced rape in 2014. Botswana must be doing very well compared to the rest of the world’s countries! 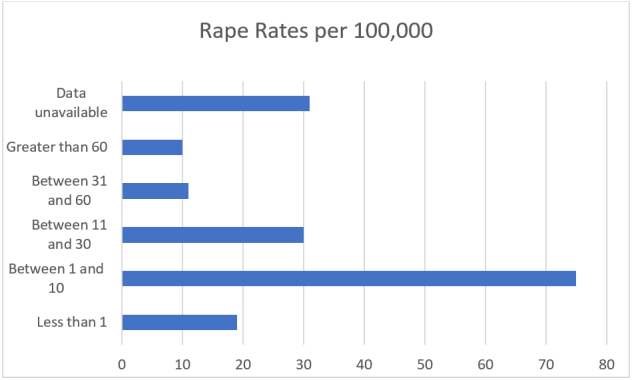 Perhaps these global trends in reported rape rates are truly reflective of the incidence of rape in the world. Unfortunately, however, research has found that this is not the case, as rape is greatly underreported.[3]

For any given year, the UNODC may only be able to report rape rates for about 120 or 130 countries because many countries either do not accurately track crime statistics or because they purposefully obfuscate them from the international community.[4]

The WomanStats database codes for 176 of the world’s nations; thus, if we were to only use the data as reported by the UNODC, we would be missing data for a quarter to a third of the countries we code.

Without access to officially reported data for many countries, we’ve had to look for comparable data elsewhere.

In a few lucky instances, the available data for missing countries have allowed us to make easy conversions into a comparable rape rate.

In the majority of missing data cases these easily converted numbers were nowhere to be found.

Ultimately, we decided to allow data estimating rape prevalence to substitute for countries with no data on reported rape. This estimated data is on such a completely different scale from the reported rape rates that we are still trying to determine how to compare the two figures in a single scale.

A major problem across the board was a lack of specificity in indicators. Data on rape, for many countries, was conflated with incidents of sexual assault, sexual violence, attempted rapes, domestic violence, and physical violence. Without disaggregated data, we cannot make any inferences about rape prevalence in a country.

Another major roadblock in finding usable data on rape is that countries will often have data on the lifetime prevalence of rape, rather than annual incidence. It is difficult to find a way to compare these two different measures.

The biggest problem overall, however, is simply a lack of available data. For several countries, there is simply no data on rape.

I am still trying to wrestle with this data to produce a coherent scale.

This process of looking at these figures and making this scale has had a significant impact on me and the way I see rape. Looking at the data, I found an overwhelming lack of institutional accountability. National governments seem to not feel accountable to the international community in reporting statistics on rape. Worse yet, they seem to not feel accountable to the survivors within their own communities.

I hope that international institutions such as UN Women and the Council for Elimination of All Forms of Discrimination against Women (CEDAW) can put pressure on national governments to accurately track and report rape rates.

I believe that increased accountability for reporting rape rates is one step toward eliminating the global rape culture that allows perpetrators to feel that they can act without consequence. In this new rape-conscious culture, I believe that survivors will be more willing to step forward and report to authorities, ending impunity for rapists.

One thought on “Accountability for Rape”