The mayor of Osaka, Japan threatened in December 2017 to cut ties with Osaka’s sister city of San Francisco, California. Why? Because of one statue depicting three comfort women.[1],[2]

The term “comfort women” refers to the women—South Korean, Chinese, Filipino and others—enslaved and raped by the Japanese army around the time of second world war. The Japanese military enslaved about 200,000 Asian women from 1928 until the end of WWII [TRAFF-DATA-1].[3] The issue has been a continuing sore point for the Japanese government, who many accuse of trying to downplay the event. 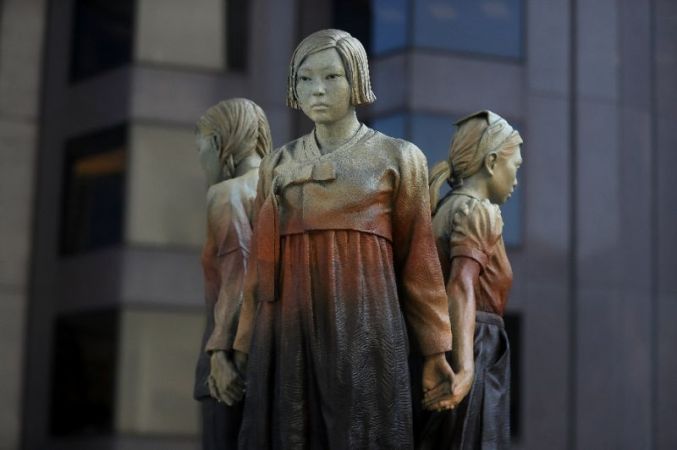 Despite the significant activism and attention surrounding comfort women, women on the Korean peninsula continue to be exploited by none other than the U.S. military. The United States hosts tens of thousands of troops in South Korea to bolster its military presence in the region.[4] Around these military bases lie at least 180 camptowns, towns rife with exploitation and cheap, immediate gratification that materialize around U.S. bases. And even though the Department of Defense holds a “zero tolerance policy” regarding prostitution for military members, prostitution and exploitation are not uncommon around these camptowns [TRAFF-DATA-1].[5],[6]

The history and stories coming out of these camptowns is sickening and heart-wrenching. The women—often falsely promised paid singing or dancing opportunities in South Korea—are coerced financially, psychologically, and sometimes physically into becoming prostitutes. South Korea and the US military’s crack down on the prostitution in camptowns has only forced the operations underground. [Click here to read David Vine’s full report on the camptowns.]

This issue is neither new nor isolated within the United States military. Women have long been exploited during conflicts by:

Countless books and articles have been written about these abhorrent practices which deserve continued attention. But the embedded practice of prostitution and armed service members promulgates a particularly insidious idea: men need a sexual release.

The Department of Defense ban on prostitution is largely based on the proven link between human trafficking and prostitution.[7] This is laudable. However, it ignores the dangerous thought process that has driven some institutions, at times, to encourage service members to seek out prostitution.

Two arguments stem from the idea that men need or deserve a sexual release:

2) Boys will be boys. Some consider the statement from Brock Turner’s father as evidence of this. He classified his son’s violent rape of another Stanford student as “20 minutes of action”.[9] This type of “boys will be boys” mentality vindicates men of countless acts of sexual harassment and assault and places responsibility for appropriateness and safety solely on women’s shoulders.[10]

These thought processes do not stay within the military, nor do they entirely originate from the military. Simply follow the pushback to the #MeToo campaign and the increasing sexual assault and harassment allegations against major TV personalities and celebrities to see how these arguments are being perpetuated in popular discourse.

[4]Staff Writer. “What is the US military’s presence near North Korea?” The Guardian. Accessed at https://www.theguardian.com/us-news/2017/aug/09/what-is-the-us-militarys-presence-in-south-east-asia

[5]Vine, David. 01 November 2015. “‘My Body Was Not Mine, but the U.S. Military’s’: Inside the disturbing sex industry thriving around America’s bases”. Politico Magazine. Accessed at  https://www.politico.com/magazine/story/2015/11/sex-industry-military-bases-213311?o=0

One thought on “Camptowns and Prostitution: Why Men Shouldn’t Need a Sexual Release”