Show me a culture that does not understand or teach consent and I’ll show you many cultures that absolve men of accountability, murder women in the name of honor, violate young girls, and exacerbate trauma. Across borders and state lines, cultures and languages, a common, shared experience of being a woman is violation of consent.

The rising #MeToo movement has acquainted cultures and communities around the world with consent, a concept we should have been intimately familiar with much sooner. Despite this recent influx of education, a disregard for consent still permeates societies, affecting the physical security of women and facilitating honor and shame culture. Consent is noticeably absent in all contexts of women’s bodily autonomy. For instance, only within the past three years, in Turkey, were formal efforts taken to repeal laws that allowed judges and prosecutors to request genital examinations of women to test for virginity, regardless of whether or not consent was given. [1]

Not only do these blatantly nonconsensual examinations occur, they can change the course of a woman’s life completely. This was the case with 17-year-old Aisha, whose husband decided she was not a virgin. An article by the Institute for War and Peace Reporting tells us, “Her husband, she said, had simply invented false accusations against her to get her out of the way.” [2] Aisha was divorced and sank to widow status. It’s highly unlikely that she would be appealing as a potential wife again, especially compared to when she was considered a virgin. Women in her community are not usually so lucky. Those who are accused of lying about their virginity are publicly humiliated and tortured, then killed by their families. [2]

Virginity testing is a common practice documented in at least 20 countries that seeks to determine whether or not a woman or girl has been sexually active. Virginity is a myth, a social construct, and impossible to deduce anatomically. There is no scientific merit for the examination of female genitalia revealing sexual activity. [3] Virginity testing is an incredibly invasive, oft-non-consensual exam and is likely to be a catalyst to trigger PTSD in sexual assault victims. Additionally, the test is wholly based on the state of the hymen. One’s hymen might be broken by going horseback riding, falling on a bicycle, slipping in a bathtub, gymnastics, or sexual assault. In different corners of the world, virginity testing may be required to determine if a woman is eligible for marriage, a candidate for certain jobs, or frankly, certified to be part of a family or community. In Indonesia, being a virgin is a requirement to be a police officer, and female police officers are required to undergo regular virginity tests to ensure they are still virgins. [4]

“She is a sister who falls in love with a man not of her family’s choosing. She is a daughter who refuses to agree to an arranged marriage, sometimes to a man old enough to be her father. She is a wife who can no longer stay in an abusive marriage and divorces her husband.” [5] Women across the globe are assigned many things because they are female, including the surrender of her marital rights (often manifested in arranged marriage and bride-price), her male relatives’ honor and her family’s reputation, and extreme expectations of virtue. Women’s stewardship over these things corroborates customs of honor and shame. If she blemishes the reputation of her family, it’s likely that her physical safety will be compromised. This map, scaled by the WomanStats Project, looks at the murder of women, known as femicide, and includes societal sanction of honor killings. Honor killings are highly prevalent in regions that place a particular emphasis on virginity. A woman’s virginity, among so many other factors, are inherently linked to her family’s honor.

Honor killings are usually completed by a male relative: father or brother. They are primarily associated with sexual activity, such as rape, sexual assault, and premarital sex. Any of these may justify an honor killing of the woman. In her book, Sex & World Peace, Dr. Valerie Hudson aptly explains, “Rape strips honor from a family. It is in this way that we must understand that the women who are raped are viewed not as victims to be supported but as stains to be erased. In such societies, rape victims may simply be killed, or exiled to towns that often spring up in the aftermath of war.” [6] Victims of sexual assault and rape are defamations in family honor and the attempt to erase them is evident in honor killings, the culturally acceptable way for families salvage their reputations. The way to manage familial honor is to control women’s sexuality.

Hymen reparation surgeries have surged in prevalence, as tensions and anxieties of proving virginity also increase. Virginity testing continues to be a cultural tell-all about a woman’s sexuality; examining the hymen is how virtue is determined for women all over the world. In many communities, not receiving a certificate of virginity is the equivalent of a death sentence. As such, many girls and women run away to avoid an honor killing or imprisonment. For women who’ve been traumatized by rape or sexual assault, their trauma is exacerbated by this pressure. Additionally, the act of running away can also be considered a moral crime and is cause for imprisonment.

Despite virginity testing being outlawed in Afghanistan, police continue to take girls and women to hospitals and demand virginity tests. Imprisonment ranges from three months to eighteen months. According to a 2016 Human Rights Watch report, almost half of all women incarcerated in Afghanistan – and 95% of girls in juvenile detention – are there for “moral crimes” such as sex before marriage. [3] When these women are released, it’s highly probable that they will not be accepted by their families and are alienated from their communities.

Because hymen examination is such a significant practice for determining virginity, this responsibility of morality for the whole society falls on women’s shoulders. If the only way to determine morality is by examining women, then only women are responsible for the honor of their community. There is no opportunity for the accountability of men. We can even scale this on a global level, evident in how frequently sexual assault is reported. Rape myths are manifested by blaming rape victims, or putting responsibility for society’s morality on women. This ultimately affects how often sexual assault is reported (pictured in maps below). Women are the gatekeepers of morality, and they are paying the price with their lives. If only women can be shamed for immorality in this manner, then having daughters is risky. 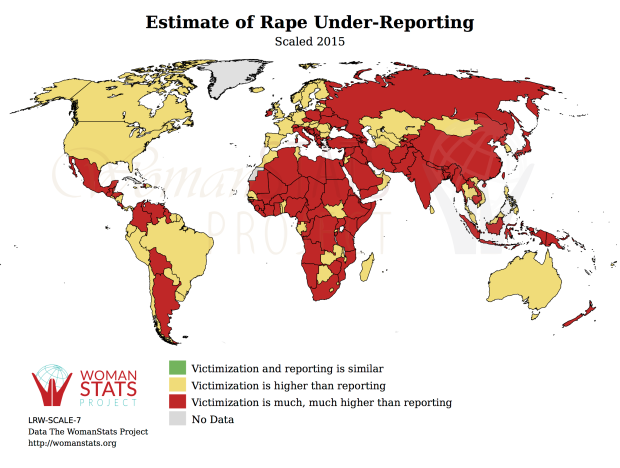 This preoccupation with virtue and purity is isolated to girls and women. Chastity is a feminine stewardship; the honor of families and societies is entirely dependent upon her purity. If a woman is unable to “prove” her virginity, her value to the family decreases for many reasons, including no longer being eligible for marriage. Virginity testing is unique to women, and yet, men are the ones who continue to determine whether or not she is “pure”. The risks of damaging familial honor are irrefutably cogent, inextricably linked to chastity, and solely a woman’s duty to preserve, as virtue is her designated burden.

[2] Afghanistan: The High Price of Virginity. (n.d.). Retrieved from https://iwpr.net/global-voices/afghanistan-high-price-virginity.

[3] Kelly, A. (2018, July 5). Breakthrough made in fight to end virginity testing in Afghanistan. Retrieved from https://www.theguardian.com/global-development/2018/jul/05/breakthrough-fight-to-end-virginity-testing-afghanistan.

[5] “I had to:” Man explains “honor” killing sister in Pakistan. (n.d.). Retrieved from https://www.cbsnews.com/news/pakistan-honor-killing-explained-interview-man-kills-sister/.

One thought on “Virginity Testing: Women as Guardians of Virtue and Honor”