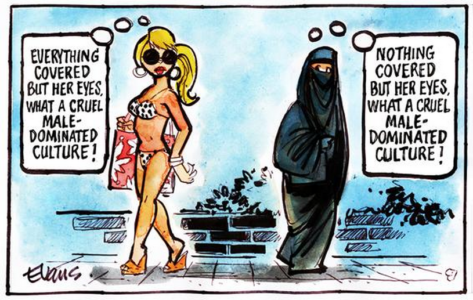 The struggle of Muslim women in Europe is a lengthy one that can be traced back to 2003. This was the year that Germany’s Federal Constitutional Court ruled that, constitutionally, teachers can wear the burka, but stated that regional governments would be the ones to ultimately decide. Shortly after this declaration, half of Germany’s states proceeded to ban teachers from wearing burkas. These bans were created and upheld by each state’s respective government and vary from region to region. For instance, the Bavarian state located in southern Germany, bans both burqas and niqabs in public institutions as well as areas where identity is key such as polling and police stations.[1] In 2004, France began to create a ban on all religious symbols including the burka, the niqab, the kippah, and Christian crosses from public spaces.

France would enact the first ban of the burka and niqab in public spaces in Europe in April of 2011. Two women protested the ban (one from France and the other from Belgium) however, in 2014, the European Court of Human Rights upheld the French and Belgian bans. The Court would go on to state that these laws were not intended to be a discriminatory tool to use against Muslim women, but rather to unite the people. The upholding of France’s ruling led to a domino effect across Europe. The Netherlands, Germany, Austria, Denmark, and the United Kingdom created similar laws between 2014 and 2018. These laws allowed employers to force their employees to either remove their burkas or be fired.[2] Furthermore, companies and employers can no longer be sued for discriminatory practices against Muslim women regarding the burqa if there is an internal rule which prohibits the wearing of any political, philosophical, or religious sign. The European Court of Justice stated that an employer may do so if they need to portray a neutral environment and/or to prevent social disputes.[3] It is important to note that this ruling comes from the European Court of Justice and is non-binding, but it sets a precedent for future cases. The Belgian and French Laws were sent back to be handled by the laws’ respective national courts.[4]

The reasoning behind the creation of these laws is unclear. Some politicians, such as Former French President Sarkozy, claimed that these laws stood as a symbol of the fight against gender inequality and the empowerment of women. The reasoning was that Muslim women who wore a burqa, niqab, or any other form of religious covering must have been forced to do so, and citing examples such as women living under the Taliban. Others have argued that face coverings are not in line with France’s notion of secularity since it is putting religion into the forefront of public spaces.[5]

European governments portrayed these laws as tools to prevent social disputes, promote anti-separatism, ensure national security, empower Muslim women, and enforce neutrality and secularism in public spaces. As hard as European governments try to represent these values, the experiences of Muslim women and data analysis tell a vastly different story. In 2019, it was reported that an astounding 44.6% of French citizens considered Muslims a threat to French nationality. At the same time, a government survey stated that about 42% of Muslims have experienced a form of discrimination due to their religious beliefs. In a third survey, 60% of Muslim women who wear a headscarf or other form of covering have stated they have experienced a form of discrimination.[7]

One public example of what Muslim women have to face in France, is the experience of Sarah Zemmahi. Zemmahi ran as a candidate for a local council position as part of the Republic on the Move (LREM) party in 2021. Zemmahi had the political backing of LREM and was one of four candidates for the position. In May of 2021, she and her fellow candidates paused to take a campaign photo together which was captioned “Different but United for You”. Once the image was published, Zemmahi faced scrutiny by both far-right politicians and members of her own party for wearing a headscarf. When Zemmahi refused to change the photo, LREM removed their political support for her. This incited a fierce debate within LREM and other political factions over the headscarf.

As of today, these laws are still in effect across Europe with some levying fines as high as 150 euros, and an educational course on religious belief in public spaces. With the events in Iran and the recent collapse of the Afghan government, Western politicians may once again claim that their Muslim citizens are being forced to cover their heads. Ironically, Western governments have done the very thing they swore not to do control what Muslim women can or cannot wear in the public sphere.

[2] Weaver, Matthew. 2018. “Burqa Bans, Headscarves and Veils: A Timeline of Legislation in the West.” The Guardian. https://www.theguardian.com/world/2017/mar/14/headscarves-and-muslim-veil-ban-debate-timeline.

“Burqa Bans Have Proliferated in Western Europe.” The Economist, The Economist Newspaper, https://www.economist.com/graphic-detail/2019/08/09/burqa-bans-have-proliferated-in-western-europe.

One thought on “Controversial Cloth: The Struggle of Muslim Women in Europe”