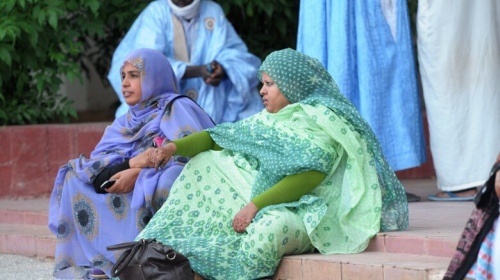 Obesity is a sign of wealth, status, and prosperity in parts of Africa

It seems that no matter where in the world you go, men’s preference dictates what a woman should look like, and societal pressure compels women to conform. We’re familiar with a culture of thinness in the West. Here, despite body-positivity campaigns, larger women are still fat-shamed on social media, and altered photographs of unnaturally skinny, overly sexualized women are celebrated on the glossy covers of magazines.

This skewed dynamic isn’t limited to cultures that share Western values. In some parts of Africa, where men prefer female obesity, women damage their bodies by trying to gain an unhealthy amount of weight in very dangerous ways.

Mothers in Mauritania, northern Mali, and Niger force their young daughters to eat and drink enormous quantities of fatty foods so that they will have plumper, more “mature” figures, hoping that they will marry early [1]. This harmful practice, called gavage or leblouh, is still legal, and remains prevalent despite efforts to increase awareness of the health risks. It affects approximately 20% of women in Mauritania [2]. 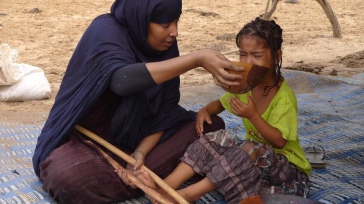 The young girl’s toes are held between two sticks as she’s fed. If she protests, the sticks are pressed together, causing intense pain.

Older female relatives urge girls as young as five or six to eat and drink far more than their bodies can handle. A six-year-old might consume four-and-a-half pounds of millet, two cups of butter, and five gallons of camel’s milk per day [3]. If the girls refuse to eat, they are physically punished; if the girls vomit, they are forced to drink it [4]. An eight-year-old could weigh 300 pounds after going through gavage [1].

And that’s not all; more than a third of women who were force-fed as children say that being obese makes it difficult to move and leave the house [2]. This limitation precludes women’s participation in sports, the formal workforce, and community leadership positions.

Gavage is, simply put, a form of child abuse that employs various methods of torture, and yet its perpetrators escape punishment because the law permits it. It is still legal because Mauritanian leaders’ fear of going against tradition keeps them from criminalizing it. The practice of child marriage and the shaming of thin women perpetuates it.

Even though women of the oldest generation recognize the damage that’s been done to their bodies, many younger adult women still pursue extreme weight gain, hoping to develop a figure that will be praised by men, and therefore achieve a higher social status [2]. Several encouraging reports from the early 2000s indicated that the practice might have been dying out, but as of 2015, force-feeding remains prevalent and unpunished [1].

What can be done? The first step must be formal criminalization of gavage as well as criminalization of child marriage. Girls can be legally married in Niger and Mali at 15 and 16, respectively. Mauritanian law makes 18 the legal age of marriage, though exceptions are granted [6].

Laws against force-feeding and child marriage must also come with reliable methods of enforcement. In Mauritania, despite the higher legal age of marriage, 34% of girls are still married before age 18 [7]. While underage marriage is still practiced, whether legal or not, force-feeding will persist as a way to make children appear sexually mature.

Most importantly, the root of the problem must be treated, not simply the symptoms. More than 60% of women who experienced gavage reported being beaten during the process, and 29% had their fingers broken when they refused to eat, but one-third of Mauritanian women still believe that the practice makes a woman more beautiful, and one-quarter of them believe that it will increase their social status in the community [2]. Such women impose the practice on their daughters, despite the risks, in the hopes that they will have a good marriage and a comfortable life. The pressure to conform is stronger than the fear of poor health and reduced mobility later in life.

The only way to stop the damage being caused by gavage is to combat the harmful beliefs and stereotypes behind the practice. That in itself is a complex task, but could be done through education – universal, thorough education about the health risks and consequences of gavage – as well as through the empowerment of women to make their own decisions about their bodies and to be self-sufficient. When women are no longer reliant on men’s sexual approval, perhaps gavage will at last become obsolete.

Is there a difference in gender-normed caloric consumption or BMI between men and women in society, and if so, does it indicate a preference towards men or women?

Describe beauty customs that may affect the health and wellbeing of women. Discuss the level of social pressure to adhere to these customs.

What is the average age of marriage for both women and men? (Age at first marriage)

What is the legal age of marriage for both women and men?

[2] Nacerdine Ouldzeidoune, et al. “A Description of Female Genital Mutilation and Force-Feeding Practices in Mauritania: Implications for the Protection of Child Rights and Health.” PLoS One 8.4 (2013): e60594. Virology and AIDS Abstracts. Web.

[3] Duval SA (2009) Girls being force-fed for marriage as fattening farms revived. The Guardian.

[5] National Institute of Diabetes and Digestive and Kidney Diseases (2015). Health Risks of Being Overweight. U.S. Department of Health and Human Services.

One thought on “Dying for Male Approval: Force-Feeding in West Africa”